THE SCHEMER by Author AVERY FLYNN 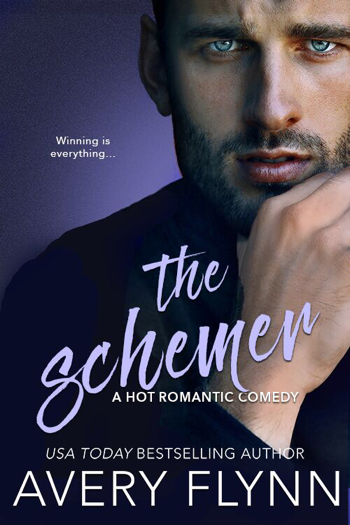 Tyler Jacobson has a plan for everything—except how to handle his completely annoying, utterly frustrating, and totally sexy upstairs neighbor. He couldn’t care less if Everly Ribinski thinks he’s equally irritating—until he discovers she’s the only one who can help him land a business deal that will finally make him feel like he’s more than just a guy from the wrong side of the tracks.

Color him shocked when Everly refuses to help, insisting she should have run him over in the parking garage when she had the chance. Harsh. But possibly deserved. Tyler may have spent the last few months reveling in annoying the fiery gallery owner with a dark past, but he’s got secret leverage she can’t refuse.

If only one meeting didn’t turn into a fake date that turned into more. Way more. Like naked and hot as hell more.

The last thing either of them wants is to catch feelings for someone who is so obviously not their type. Good thing that will never happen. Right?

This was my first Avery Flynn read, its why I was so excited to receive an ARC for this book. The synopsis alone got me hooked in.

Tyler Jacobson is someone who made a name for himself based on sheer hard-work, grit and perseverance. He grew-up on the other side of the river, and is determined to leave his past behind and focus on building his success. He has a plan for everything, and Everly Ribinski isn't included in those plans at all... But you know what they say about plans—they change.

I admit it was a slow-burn for me. I thought the characters' first couple of interactions were a tad bit childish. Their barbs were funny but the hot and cold was frustrating. It's like they cant decide which way to go when its pretty obvious. But of course there was a little push from people playing cupid... and from there, it picked up speed and became all swoony.

The story isn't very original but I enjoyed it nonetheless. The supporting characters were great; the pacing was great; the cover is definitely hot...and man, the love scenes are pretty scorching!lol

If you're looking for a light and easy read, this is the book to pick-up next.