THE LEGACY by Author Dylan Allen 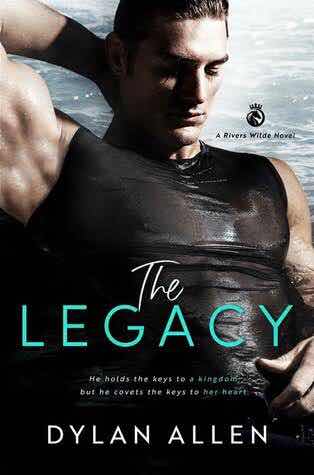 He holds the keys to a kingdom. He covets the keys to her heart..He’s the king of all he surveys. Except her. Exiled for 15 years, Hayes Rivers has finally assumed his place as head of Houston’s oldest and most powerful family. Now, they call him King. A legacy of wealth and prestige are his to claim. As age-old rivalries, long- buried secrets, and generations of betrayal threaten his birthright, he finds himself in a battle for control of his family’s future. When he meets Confidence, she’s a sweet distraction. Everything he shouldn’t want. But after a weekend of passion and surprising intimacy, he realizes she’s everything he needs. He holds the keys to a kingdom.. But he covets the key to her heart. And he’ll stop at nothing to claim his queen.
MY THOUGHTS AFTER READING....

This would be my first Dylan Allen ARC... I'm a bit embarrassed to admit that I haven't read anything of hers before this. I received a sign-up email and when I'd read the blurb, I was hooked and was already looking forward to the day the ARC's will be sent out.

I loved the blurb, but finally reading the book and taking the journey with Hayes and Confidence, made me fall in love with it.

This is a story about fate... about destiny. You'll never know when and where you'll meet the love of your life. But even though fate or destiny put you two in each other's paths, it is still up to you to make it work... to nurture it... to protect it... and to fight for it... and this book showed me that.

The main characters were relatable... Hayes, in a sense that he's willing to make changes without compromising his total person... Confidence, in a sense that she's not easily fazed and works real hard to rise above any situation without being blinded by prestige and money. I also love that they're both strong individuals but also have their vulnerabilities regardless of their social standing, especially Hayes.

The pacing is great... the cover is hot.. it has just the right amount of sexy, angst and humor.... definitely made a huge romantic sap like me swoon and daydream!