ON A TUESDAY by Author WHITNEY G. 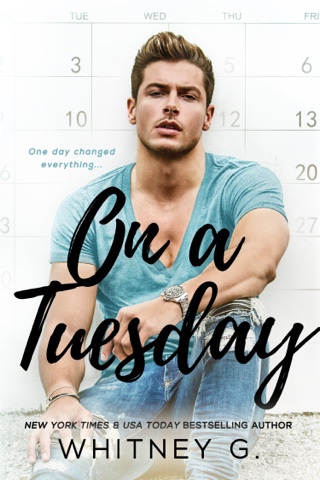 BLURB:
We met on a Tuesday. Became best friends, then lovers, on a Tuesday. And everything fell apart on a Tuesday... Charlotte Taylor has three automatic strikes in my book: 1) She hates me. She also claims that I'm a "domineering jerk with a huge, overbearing ego." (I do have something huge. It's not my ego, though.) 2) She takes our mandatory tutoring sessions way too seriously. 3) She's sexy as hell...And a virgin. At least, those were her strikes before our study sessions started lasting longer than they were supposed to. Until one innocent kiss became a hundred dirty ones, and until she became the first woman I ever fell hard for. Our future together after graduation was supposed to be set: Professional football for me. Law school for her. But she left me at the end of the semester with no explanation, and then she completely disappeared from my life. Until tonight.We met on a Tuesday. Became everything, then nothing, on a Tuesday. And now it's seven years later, on a Tuesday...

My Thoughts After Reading...

I loved it! The storyline, the characters, the pacing, the flashbacks... I friggin love everything! From the second I got the ARC from my inbox, I had a feeling this book is gonna be one of those books that you just cant get enough of.... and so I devoured the book right away and finished it a in a couple of hours disregarding any household chores! (What? Dont judge me! Lol) And the book cover?? Hearteyes!!

I've read a bunch of celebrity-normal-person romances lately... If you'd go through my blog, the last couple of entries I wrote were about celebrity romances...but so far this one takes the crown! Aaaand as I'm writing this review, its my fave, lol.

The main concept isnt something new, but what was unique is the way it was told... I loved how the characters evolved... how everything worked themselves out... it wasnt rushed... it had equal parts comedy, drama and romance... and Man I had butterflies in my goddamn tummy as I was reading through for crying out loud! Serious butterflies! The story just flowed so perfectly even with the flashbacks... The flashback chapters are a great touch!

Grayson Connors is just—SWOON (for a lack of a better word). I guess its true what they say about men in books being better.... lol And Charlotte Taylor isnt to be underestimated either! Their personalities just really compliment eachother well... They actually (sorta) reminded of me Hailey and Nathan from One Tree Hill... because of the tutoring thing...

I've read some of the author's work, and I gotta say that this is my favorite of hers—hands down! I cant wait to read more of her upcoming releases!

My only complain (as usual) is about the epilogue... I just wish it was longer. I would've wanted to read more about them... of them getting actually married or raising kids... (sigh) I'm such a romantic sap, lol.

ON A TUESDAY is out! Get your copy now! 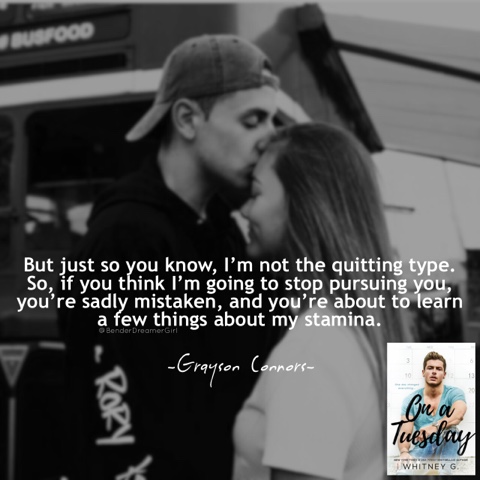