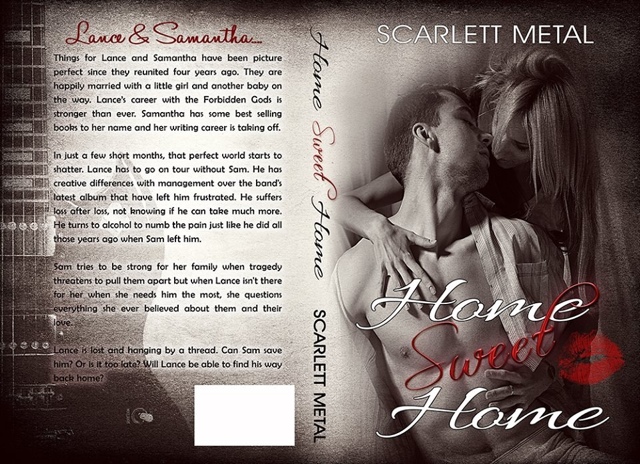 SYNOPSIS:
Things for Lance and Samantha have been picture perfect since they reunited four years ago. They are happily married with a little girl and another baby on the way. Lance's career with the Forbidden Gods is stronger than ever. Samantha has some best selling books to her name and her writing career is taking off.
In just a few short months, that perfect world starts to shatter. Lance has to go on tour without Sam. He has creative differences with management over the band's latest album that have left him frustrated. He suffers loss after loss, not knowing if he can take much more. He turns to alcohol to numb the pain just like he did all those years ago when Sam left him.
Sam tries to be strong for her family when tragedy threatens to pull them apart but when Lance isn't there for her when she needs him the most, she questions everything she ever believed about them and their love.
Lance is lost and hanging by a thread. Can Sam save him? Or is it too late? Will Lance be able to find his way back home?
My thoughts after reading...
I was beyond excited about the release of this novella. Thank God twas released a couple of days earlier than planned.  I am such a big fan of I REMEMBER YOU, and as soon as I finished reading it, I wanted more of Lance and Sam... And for sure I wasn't the only one who suggested for a sequel, and voila---HOME SWEET HOME was written :)
This story is about Lance & Sam's life four years after their reunion... They're raising their small family in the suburbs of Wisconsin---living a low-key life despite their status---Lance being a rockstar, and Sam being a best-selling writer. They now have a toddler---an adorable daughter named Emma... Sam is currently pregnant with their second child... I love how they are with eachother...the kind of family they built; how doting Lance is to his daughter Emma, and how a loving, loyal and sweet husband he is to Sam.
Lance's band, the Forbidden Gods is scheduled to go on tour and promote their latest album. You know how time-consuming tours are and not to mention, the tour bus isn't the place for a pregnant lady and a toddler. Thats why this time, Sam opted to stay home and finish writing her book...Long story short, things don't work out as planned, thus making things a bit challenging for the couple..
I empathized with the main characters...their predicament, their apprehensions... I understand Sam's temperament regarding Lance's drinking. It may seem a bit of an over-reaction but she can't help it. She loves Lance and their family too much to let the vice destroy them and pull them apart... and Lance... I can also understand why Lance did what he did. Of course the pressures of touring, of being way from your loved-ones, and learning of your mother's cancer is too much to take... Heck! If I was him, I would probably jump off a precipice! Dealing with a clusterfuck of emotions is always overwhelming, regardless if you're a dude or a girl.
Each and everyone of us is conditioned differently, and therefore react differently to certain situations... What others may shrug as not a big deal, to some, it may feel like the end of the world... So we mustn't be quick to judge.
I jerked a couple of tears in that part where Lance can't wait to get home to Sam and Emma...you know that part at the airport where he was rushing through the sea of people then saw them waiting for him, sweeping Emma to an embrace and tucking Sam by his side... Missing someone you love is such a terrible feeling to have... And I felt for Lance and what he was going through.
Anyway...I'm happy miracles happened and they pulled through in the end, and overcame their problems.
Loved the story! Reading Scarlett's novellas paints a clearer picture in my head than some of the 400-paged novels I've read...and I have read a whole lot over the past year lemme' tell ya ;) 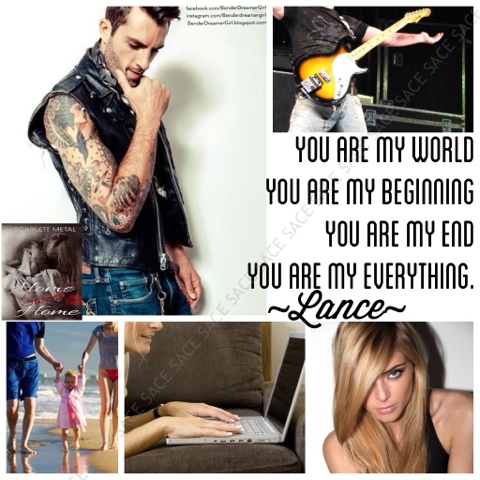 So, anybody who hasn't read about Lance and Sam's story download your copy of I REMEMBER YOU and HOME SWEET HOME now from Amazon. Just click on the links provided below:
Other novellas by Scarlett Metal: