THE MAN IN THE BLACK SUIT by Author SYLVAIN REYNARD 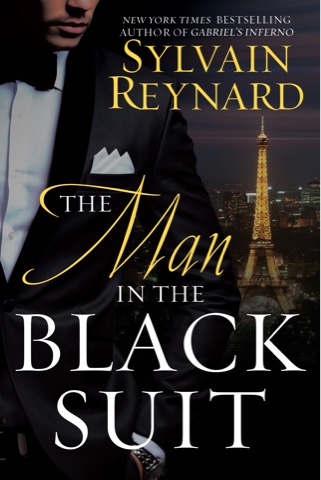 BLURB:
Acacia Santos excels at her job as concierge at the prestigious Hotel Victoire in Paris. When her superior, Marcel, is attacked in a supposed random mugging, she is tasked with serving one of the hotel’s most mysterious and attractive guests.
Nicholas Cassirer checks into the hotel under an assumed name every three months. Usually, he stays in the penthouse suite with a beautiful female companion but on this occasion, he arrives alone and is displeased in having to deal with someone new. A match of wits ensues as he tests Acacia’s expertise with a series of almost impossible demands. Her intelligence and creativity rise to the challenge, earning his respect. They strike a tenuous accord until Acacia discovers a famous stolen painting in his suite, she contacts a former boyfriend who works for the elite BRB, a unit of French law enforcement that deals with art thefts.
Nicholas is questioned by police and released when it is revealed the painting is a reproduction. Irked with her behavior, Acacia’s supervisor demotes her threatening dismissal and the cancellation of her work permit. But Acacia has already attracted Nicholas’s attention. Remorseful that she may lose her job on his account, he offers her a choice – she can wait until her supervisor dismisses her, or she can leave the city of lights behind and become his personal assistant. Acacia initially refuses his offer, but Nicholas is persistent. He reveals himself as a man who quietly acquires stolen art in order to restore it to its rightful owners. Faced with mounting familial debts and the possibility of dismissal and deportation, she agrees to work for him. Nicholas opens up a whole new world of beauty and intrigue to Acacia as they travel the globe. Soon the line between employer and assistant is blurred, and the two lonely people embark on a passionate relationship.
MY THOUGHTS AFTER READING...

First of all, to receive an ARC from the Sylvain Reynard is definitely the highlight of my year... I've been a fan for a long time.  I have all the Gabriel Inferno Trilogy paperbacks... it's not easy to get a copy of it in this part of the globe because they get sold-out right away but I've been diligent enough keep going back to the bookstore to check for copies...

I've been waiting for this book for months! Months! And to receive an ARC of it made me so ecstatic. I consider it to be an early Christmas present.

In that email packet I received, there was a warning about it being long.... and honestly I was a wee bit apprehensive cause it was true that it was indeed cutting it close. I was reviewing several books beforehand, and I was scared I wouldnt make it to the deadline... but here I am, smug and smiling.

I only started reading it this morning and just finished a few minutes ago. It took about 6 hours, give or take. I cant even wait to write this review. I didnt expect this to blow me out of my friggin mind. I mean, page after friggin page, I cant seem to un-glue myself from my iPad. I've barely even eaten! Every chapter just gives you that certain crave... that certain high... I've never tried illegal drugs in my entire lifetime but I imagine this is how it feels... this book is so friggin amazing!

If this were a movie, it would definitely be a blockbuster hit! How the author wrote it, it was vivid and every little bit that was written was necessary to the whole story. As a reader, I normally get a slump somehwere in between especially when reading a long story... but in this one, I just cant get enough... even towards the end, I was longing for more. It was worth spending my time on—every minute was worth it.

It was just the right amount of action, thrill and romance... Nicholas and Acacia's story reminded me of a modern day Beauty and the Beast–A troubled hero with a scarred face and a beautiful, compassionate heroine who see's beyond the physical... The pacing, the cover, the development of the story and the growth of the characters—are all beyond great! I can't sing enough praises!

I cant wait for the paperbacks to be released here. I hope it wont take very long.

THE MAN IN THE BLACK SUIT is everything you'd want in a book! Get your copy now! 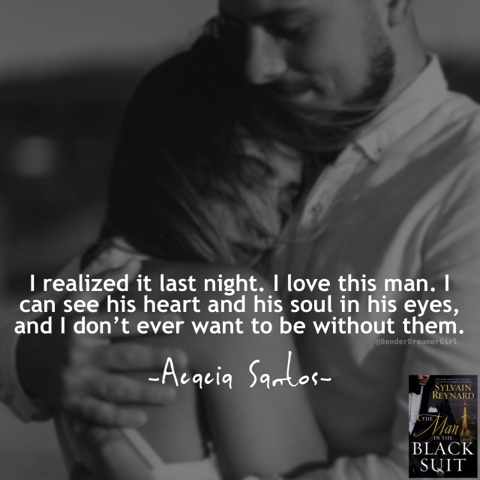