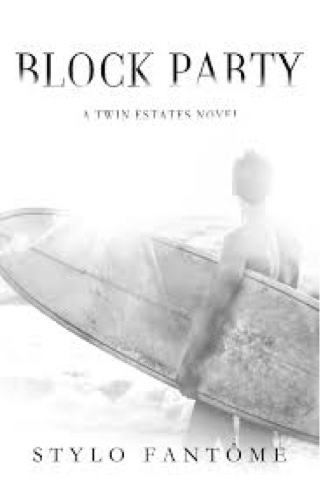 BLURB:
Things you need for a good Block Party: 1. Awesome food 2. Great Music 3. Fun games 4. A secret spot to hook up with your even-more-secret girlfriend. Liam Edenhoff is a simple creature. He likes women, tacos, and sex. As long as he has those in his life, everything is good. He's finally realizing maybe he's just not cut out for relationships - surely there's got to be a woman out there who'd be okay with roof top margaritas, casual sex, and no attachments. Enter a new neighbor - one who is allergic to commitment and prefers her sex casual but frequent. She's seen him at his worst and is still willing to play his games, on three conditions - discretion is a must, casual is key, and absolutely no drama. Sounds like the perfect arrangement. What could go wrong? Famous last words when dealing with neighbors. This story contains scenes of a graphic sexual nature, multiple uses of coarse language, and more tacos than is healthy or sane to read about. Reader discretion is advised.  This is the third installment in the Twin Estates series

I was provided with copies of the first two books, and an ARC of this one—BLOCK PARTY, but I've already read the first book, NEIGHBORS when it came out.

At first I was debating on how to write my review... do I write one for each or no? Yeah... So I decided to write one for this one because technically this was the ARC but to be fair I will talk about the series in general... I will try my best not give out spoilers... If you're someone who's looking to read reviews about BLOCK PARTY, I simply had to assume that you're already done with NEIGHBORS and THE NEIGHBORHOOD. So lets do this!

Oh man, where do I begin? So the first two books generally revolved around KATYA, LIAM and WULFRIC... You know that saying, "Its all fun and games until someone loses an eye.."? Well nobody lost a body part but someone did get their heart smashed into pieces—thats what happened.

When I read the first book, I didnt expect how the story would run and end... And when I read the second book, I was confused along with Katya... Both guys are total opposites, and both have their own redeeming qualities. What the guys did was really shitty... and what Katya did in return, was also shitty. Two wrongs doesnt make a right. Wrong is wrong... Playing games could only go for so long until it hurts the players themselves. And to be honest, the second book was my favorite because it was more emotional and there were some scenes that pulled on my heartstrings... and I'm glad it ended the way it did. I think deep down I was really rooting for Wulfric and Katya together... their characters just meshed really well.

And this latest book (well latest for now)... this was definitely a twist in the series. The  third book... I didnt expect it was going to be about LIAM and AYUMI! Ayumi of all people! (no offense). I was very curious on how their story would play out... If Liam and Katya were opposites, I dont know how to define Liam and Ayumi... but turns out they're not as different as they thought they were... find out how it all started and unfold! All these and more!