MY ENEMY NEXT DOOR by Author Whitney G and Nicole London 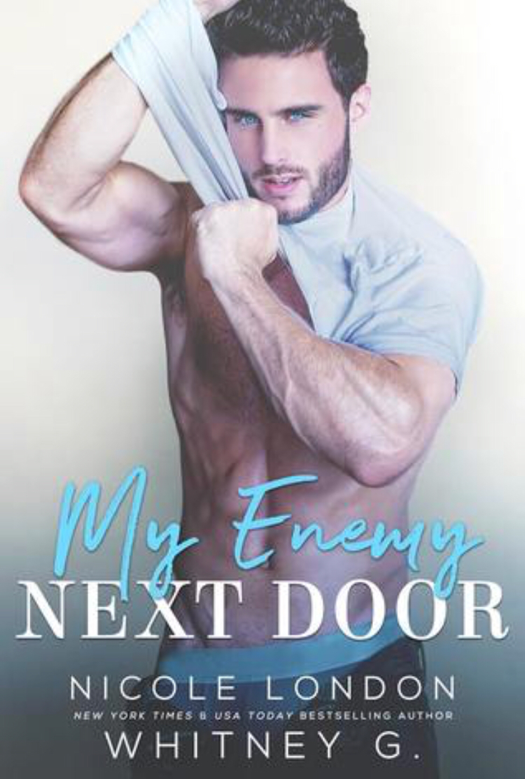 BLURB
We used to be close.We used to be best friends.Until we became enemies all over again...
Courtney Ryan ruined our on and off again friendship with one swipe of her sexy, red pen. After the final rude message she wrote in my yearbook, I decided that we didn't need to see each other anymore. (But if we ever did, I would show her exactly why I had every reason to be "cocky," and make her admit that I really *was* "that damn sexy.")
Now that it's ten years later, I've graduated from law school at the top of my class, and I'm being recruited to work at the number one law firm in New York City.
Since I'm in desperate need of a change and want to meet new people, I don't hesitate to accept the offer.
Until I find out that Courtney Ryan graduated from law school, too.Until I realize that she'll be working at the same exact firm, in the office right across from me.
And if this timing isn't unfortunate enough, she's far more tempting and sexier than I originally remembered.(Oh, and last night I found out that she lives right next door...)
We don't have to be close.We don't have to be best friends.But she's going to pay me back for making us enemies all over again...
MY THOUGHTS AFTER READING...
I dont know if I've said this enough, but Whitney G has become one of my favorite authors todate... All her releases lately has been just so awesome! I've practically read most of her books and I had been excitedly waiting for this one since it was announced. And as for Nicole London, this would be my first time reading something from her, and I plan to rectify that in the future...

This book revolves around highschool sweethearts Jace Kennedy and Courtney Ryan... when Jace went off to college and left Courtney behind, insecurities were heightened, trust issues arose and there was a whole lot of miscommunication. And fast forward to 10 years, they met at the same workplace where Jace was a  newly hired hotshot and as Courtney's supervisor...kind of. So it all snowballs from there.

I immensely enjoyed reading this book! Their barbs, the sarcasm... the pranks... everything! It was hella funny... But its not only that, it has heart as well... some moments where it pulls on your heartstrings and makes you just want to sigh and think, Aww thats really romantic... I love that..

So my only complain is that it doesn't have an epilogue and it was fairly short for a novel. Personally, I didn't mind that it was a wee bit short because it already has everything, but the epilogue! Man, I live for those!lol I was like, thats it?? what happens next for those two?! Suffice to say that it kinda left me hanging... yeah, so that...

Its light, and loads of fun. Definitely something you'd wanna read if you want a pick-me-up or if you're feeling mopey. This book will surely cheer you up.