Synopsis:
Ever since the one time Andie Weber threw caution to the wind - and paid the price for it - she’s learned that it’s safer and smarter to live life playing by the rules. Now she’s got a great apartment, a steady job, and a wonderful boyfriend in Colin; he’s sweet, stable, and essentially perfect – except maybe for the fact that his best friend is Chase.
Chase McGuire lives his carefree, unstructured life strictly for himself. Dripping sarcasm and oozing wit, he refuses to censor his feelings or opinions for anyone, making no apologies for either and wearing his abrasiveness like a badge of honor. No one has ever gotten under Andie’s skin the way Chase does – and vice versa.
So when Andie and Chase find themselves forced to take a two-day road trip together, they are already dreading an inevitable all-out war. But as the trip progresses, and the undeniable friction that has always defined their relationship slowly begins to wear away their preconceived notions of each other, Andie and Chase discover they both have a lot to learn about life, courage, happiness, and the age-old battle between logic and love.
My thoughts after reading...
When I read the title, my initial thought was, this book is a legal drama about some teenage girl named Andie from her abusive parents and some handsome guy comes along and saves her or something... Of course, I didn't read the synopsis and I temporarily forgot the "don't judge a book by it's cover" bit or in this case "don't judge a book by its title."
Emancipate, meaning to free from restraint, influence, or the like... free...unbound...loosen...release...
And as it turns out, Emancipating Andie is really just about Andie (short for Andromeda) embracing her real self...about Andie, to try and take risks, and to start living her life the way she wants to and not be restrained by certain fears or by her constant rationalizations... I should be the one to talk since I can relate by being too cautious and mostly practical about certain decisions...of which can also be so draining given the fact that there's so much more out there and to know in your heart you could be much happier... Anyway... Since the "incident" that happened to Andie a couple of years ago, all she really wants, in life in general, is to feel safe... I mean who wouldn't?? We can't blame her.. afterall she was almost raped... and to think it happened when she was still very young. Of course it causes her night terrors, paranoia and phobia...
Then fate steps in again and she finds herself going on a roadtrip to Florida to attend her boyfriend Colin's childhood friend's wedding, with the ever dashing hottie & freelance photographer Chase McGuire--who is also one of Colin's closest friend... Whew! Talk about complications...  They got to know more about  eachother and unexpectedly fall in love through the whole trip... of course, neither one of them wants to acknowledge it and fights their (feelings) damn hardest for eachother... and they have someone in common they dont wanna hurt---Colin.
Yes, I feel bad for Colin... He was just collateral damage. It happens, really. But in the end, its only fair for everybody to be with the one they truly want and love... I mean, do we wanna be with somebody and sacrifice our own because we don't wanna hurt other people's feelings? Do we wanna be with someone who only half-heartedly loves us? The saying, "I'd rather be alone than unhappy..." can also be applied here and not just on a cheating ex-lover right??
Like I always say, the heart wants what the heart wants... And though its practical and rational  to use logic and be safe rather than take risks, still, some things (or people) are worth it...and knowing at least you gave it a go then all the effort is worth all the tears and the pain... The saddest part of loving is not the unrequieted kind but the not-saying anything kind... And I'm happy that in the end, both Chase and Andie realize it... I love their story I hope there'll be a sequel... I need more Chase and Andie  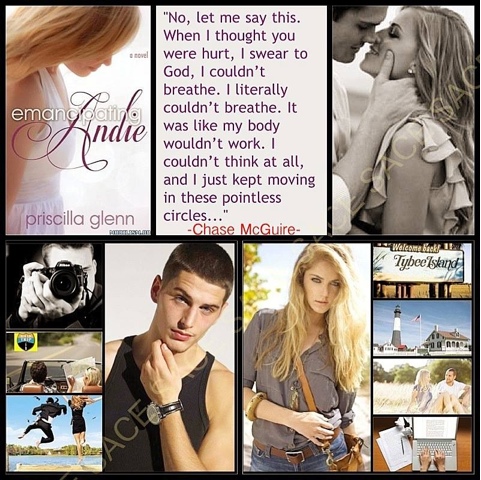 GET YOUR COPY BY CLICKING ON THE LINK BELOW: