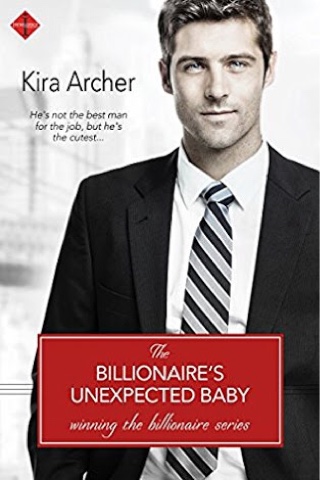 One minute, pregnant Leah Andrews is throwing up over the side of a yacht andthe next, she's married to party boy Brooks. It's an arrangement born of sheerdesperation to save her job, but now the tabloids are all over them, their friends are running a pool betting on whether they'll actually stay married until Baby Day, and worst of all, she and her new husband might just be falling for one another. But they belong in opposite worlds. It'll never work.

Billionaire app developer Brooks Larson lives his life on the light side. Until he tries to play hero and claims to be Leah's husband. Now he's up to his ears in Lamaze classes, baby powder...and unexpected marital bliss. But he'd make a rotten husband and horrible father. Leah and the baby deserve so much better. Add in major baby daddy drama and the whole situation is the worst idea EVER. But sometimes those bad ideas might just be the best ones.

This was definitely a fun and light read. I thought this was just going to be one of those cheesy and predictable romances, but its not. Well, not really... I mean sure from the outset I knew it will have a happy ending because I live for those, its why I love to read and escape from reality...but yeah, I loved it.

The story wasn't overly unique, but it has its own uniqueness... Brooks was a party boy and Leah is his opposite... And what does a party boy want with an already pregnant bookworm?? hmm. That old saying about opposites attract may hold some truth in this story. Hasty decisions were made and situations felt overwhelming... felt like they've bitten more than they could chew... and to top it off, an old nemesis just wouldn't bug off, making a complicated situation even more complicated. Are you intrigued it yet??lol

This was actually my first time to read anything from Kira Archer and I must say that I enjoyed it. Yeah sure, there were times when I wanted to slap Brooks and yell at Leah but I reckon it ws necessary to the story and for their characters to be written that way...

I haven't read the first book in the series, and I'm going to rectify that real soon.

So of you're looking for a light read with a pregnant heroine and a cocky playboy, this is the book to read next!